How to Open Edit

You may also be able to open a Hero Treasure Chest after instances such as Experience Trials, Money Vault, Material Groove (Basic, Intermediate or Advanced), Costume Corner, Combo King, Pet Place, Feather Zone, Goddess Defence (Normal, Heroic or Nightmare), Icy Impass (Normal, Heroic or Nightmare) or the multiplayer instance, Romantic Interlude. However, this is based on chance and you may not always be able to open a Chest even after completing all the instances.

This means that the maximum number of chests that can be opened for free per day is, if you're lucky, is 23.

You can see the prizes you and other people have gotten in the "Adventure Record" on the left side of the interface.

You may also receive 5 achievement points after opening 1k Hero Treasure Chests. This is approximately 25 vouchers and a 250 max HP increase, which means might increases. 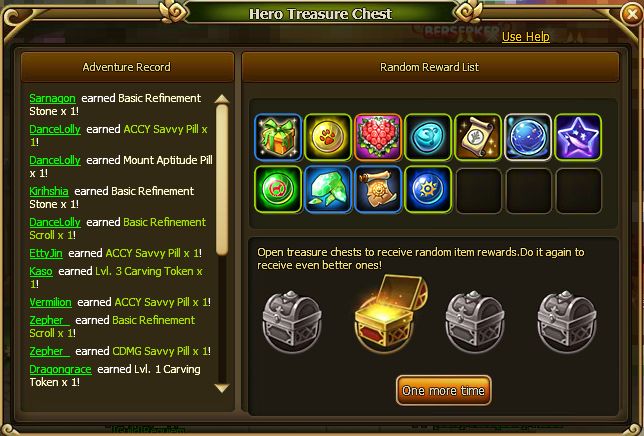 Retrieved from "https://lunaria.fandom.com/wiki/Hero_Treasure_Chest?oldid=5434"
Community content is available under CC-BY-SA unless otherwise noted.